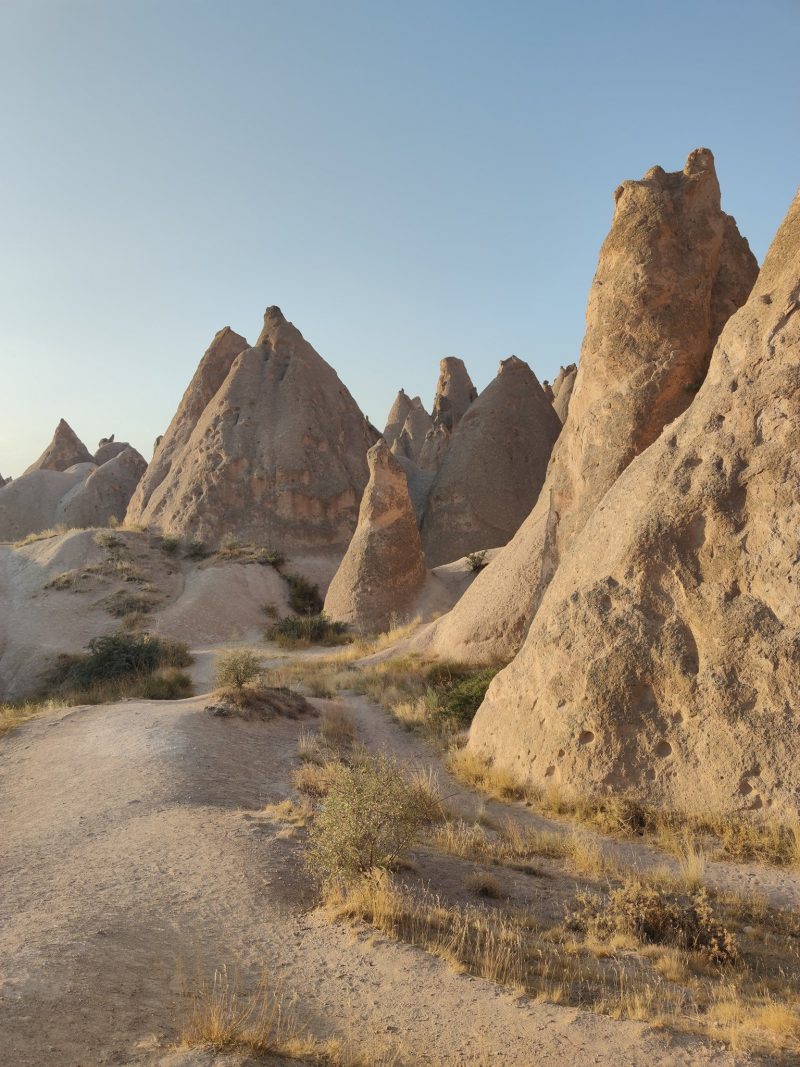 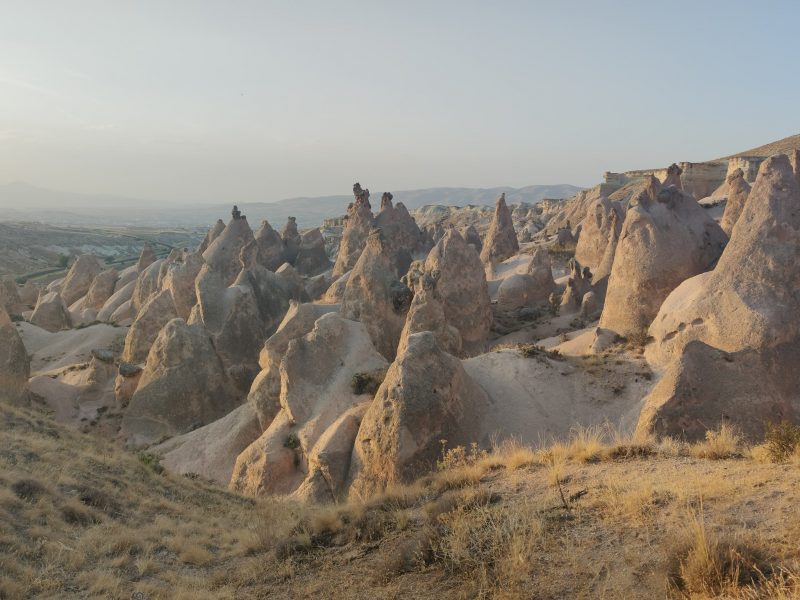 If you’ve seen photos of hot air ballooning in Cappadocia in Turkey you are bound to have noticed the strange yet striking rock formations in the landscape. Looking like giant mushrooms or sculptures, they are in fact, natural geological stone formations, created by Mother Nature. 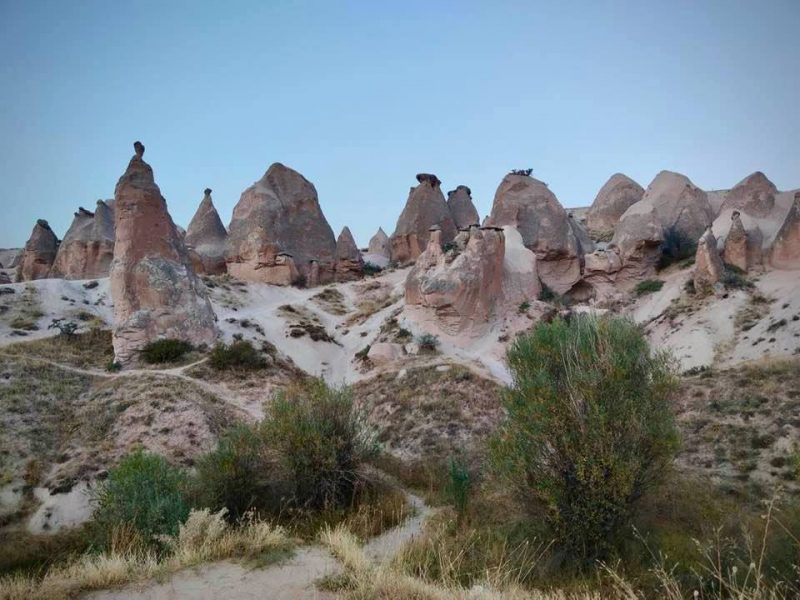 Known as ‘fairy chimneys’, these towering rock formations, reflect the colour of sunrise and sunset and create an almost surreal landscape all around the area of Goreme in Cappadocia. Every year thousands of tourists come to witness these creations with their own eyes and to marvel at this unique landscape. 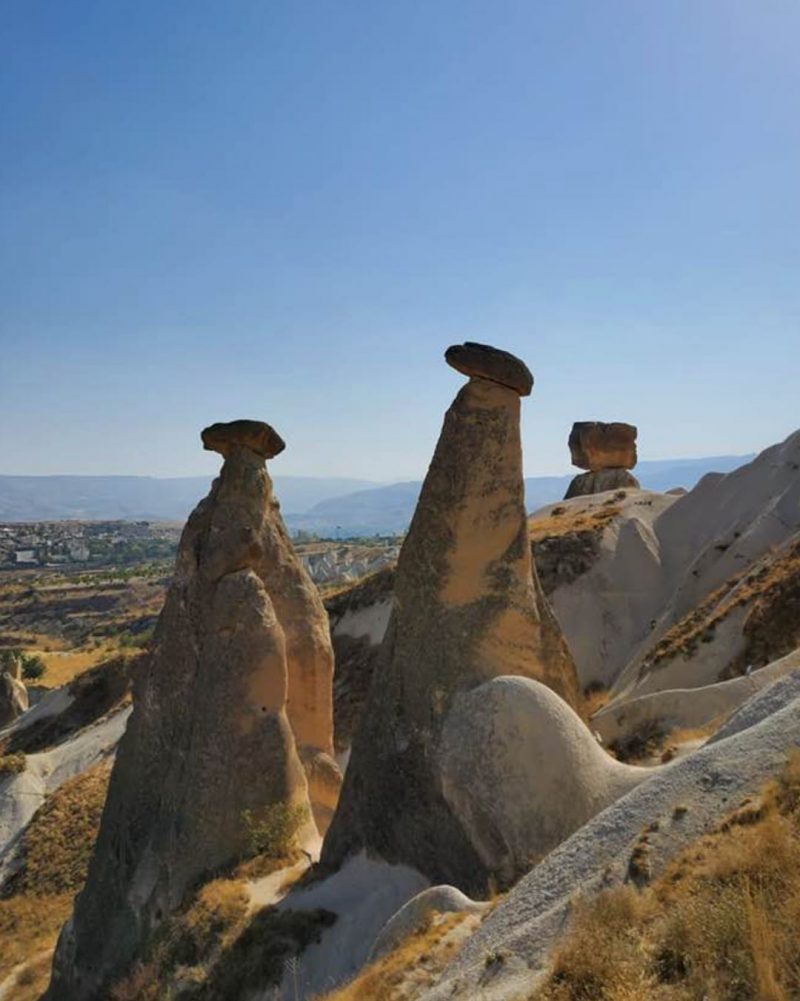 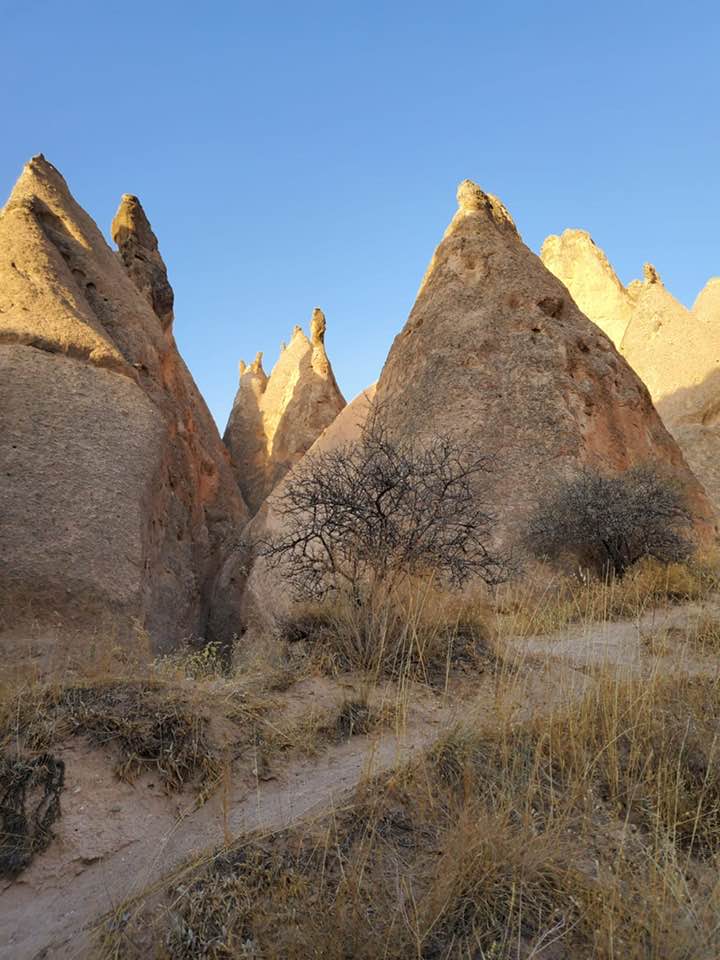 Created via a geological process that began around 60 million years ago, they are the result of ancient volcanic eruptions which covered the region in ash. Later this solidified into a soft rock called ‘tuff’ which was then eroded over the years by wind, rain and flooding, leaving behind the ‘fairy chimneys’ that can be seen today. They come in all shapes and sizes and stretch as high as 40 metres into the sky. 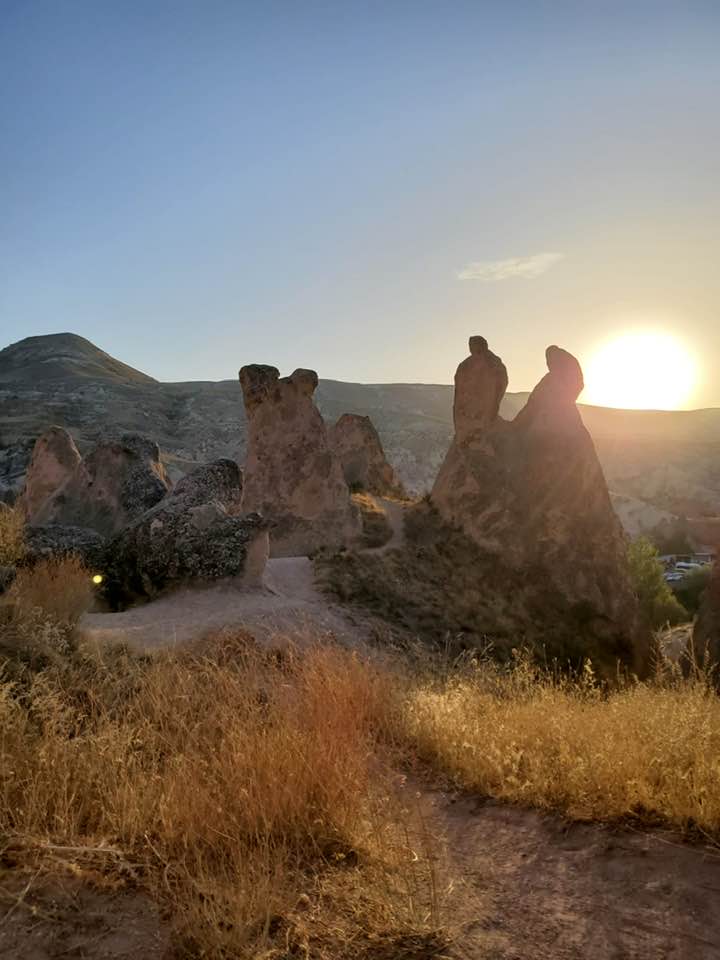 Cave Dwellings – A Refuge For Christians Fleeing the Romans 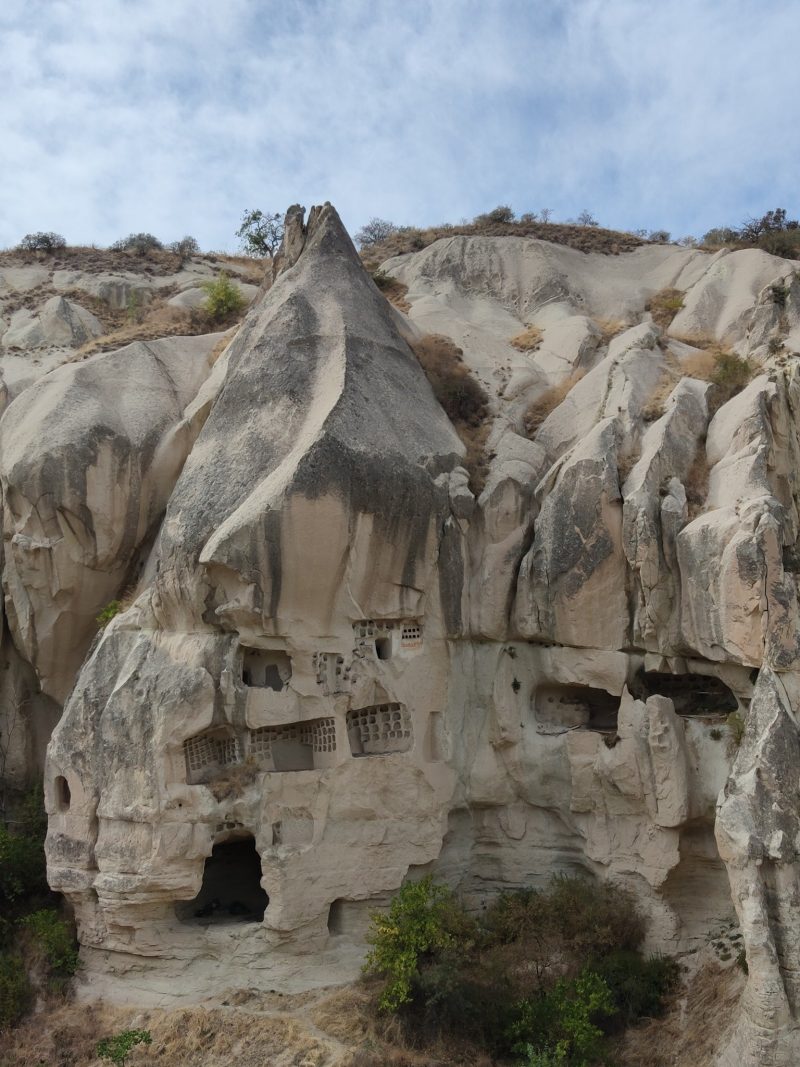 During the Roman period, persecuted Christians fled to Goreme in Cappadocia seeking shelter in this area. They used the soft malleable stone to carve out dwellings. They built a network of caves, living quarters, churches, stables, and storehouses, many of which were created underground so that they could hide from their foes. 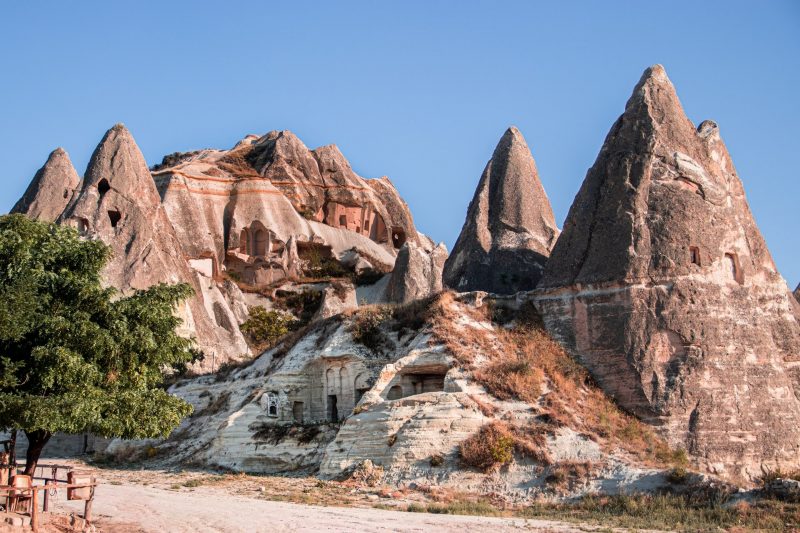 A Network Of Self Sufficient Underground Cities 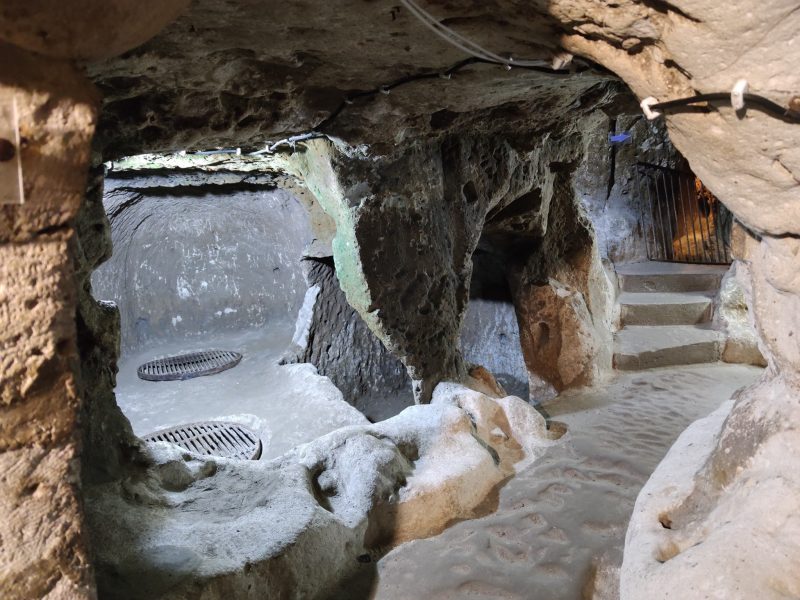 Underground cities like Derinkuyu were capable of housing as many as 20,000 people at a time and were equipped with wells, olive presses and even wine presses so that they could make their own  wine. They even had separate rooms dedicated to housing their dead, since they were unable to bury them, and they used large rolling stone doors to protect themselves from their enemies.

Churches Carved Out of Stone and Decorated with Frescoes

As well as providing housing,  many churches were carved out of stone and painted and decorated with beautiful frescoes, many of which are still visible today. 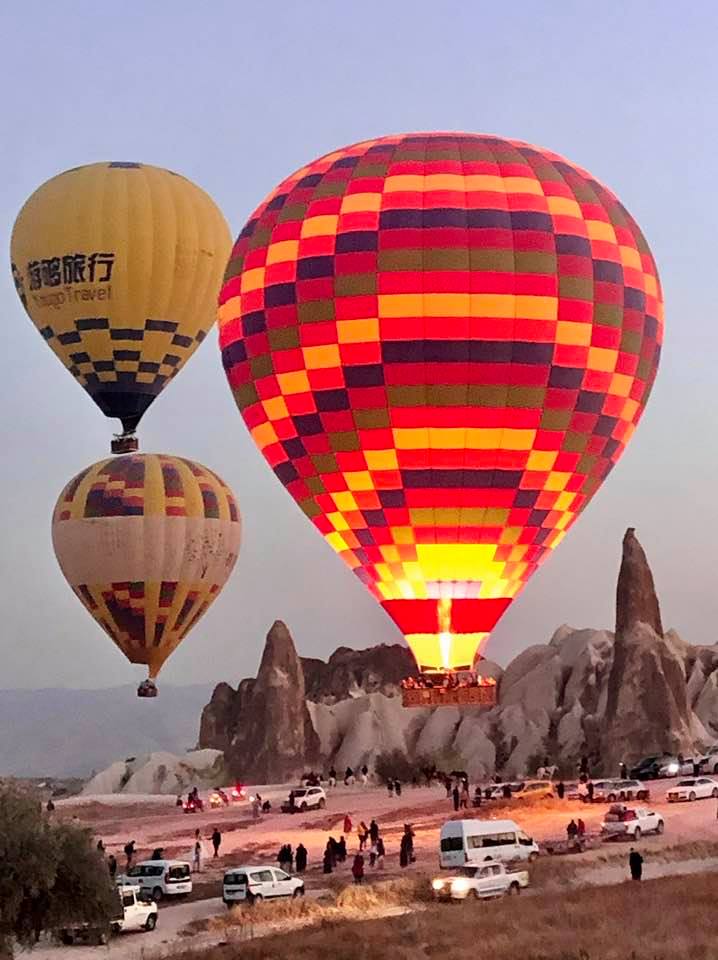 Cappadocia has been designated a UNESCO World Heritage Site and the area is definitely worth visiting as there is so much to see and do. Many people come for the hot air ballooning, and from the sky you can get an amazing bird’s eye view of this special landscape – but there is plenty more to do in the area.

Where To Find The Fairy Chimneys

There are thousands of fairy chimneys all over Cappadocia. You can find them most readily in the valleys in the region from Avanos to Ürgüp and Uçhisar. 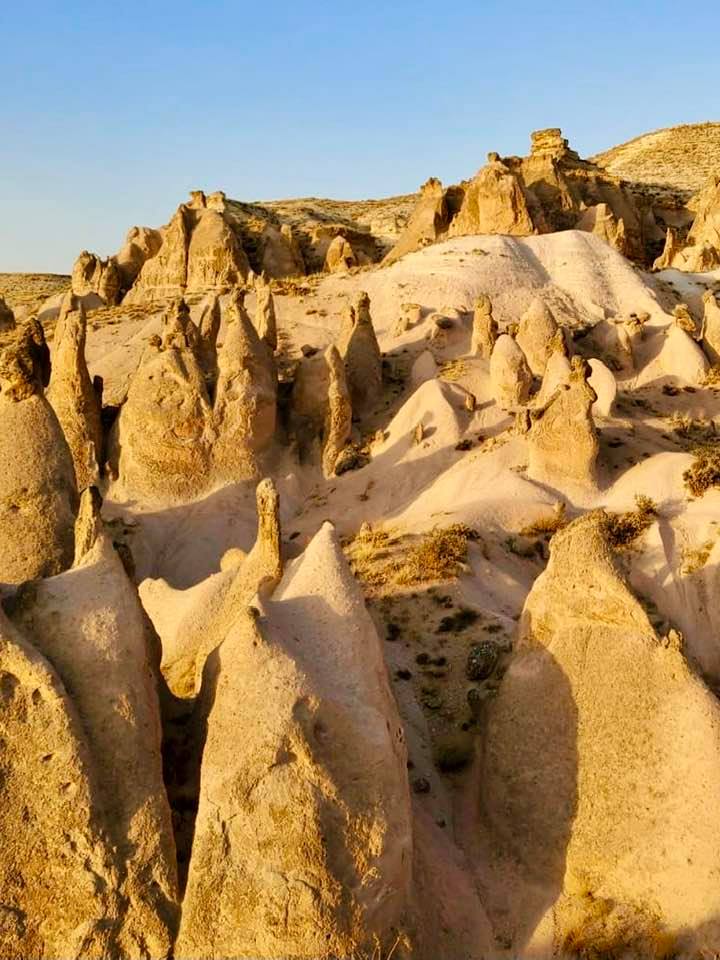 Why Not Stay in a Cave Hotel in Cappadocia?

For a really authentic experience why not stay in a “cave hotel”?

We went in early October and stayed in one which has been converted into a luxury boutique hotel. Our hotel was the wonderful Museum Hotel, a five star, Relais & Chateau hotel which is located in Uçhisar and surrounded by a landscape dotted with rock dwellings, fairy chimneys and caves. However, there are a range of cave hotels to suit all budgets and make for an unforgettable stay. 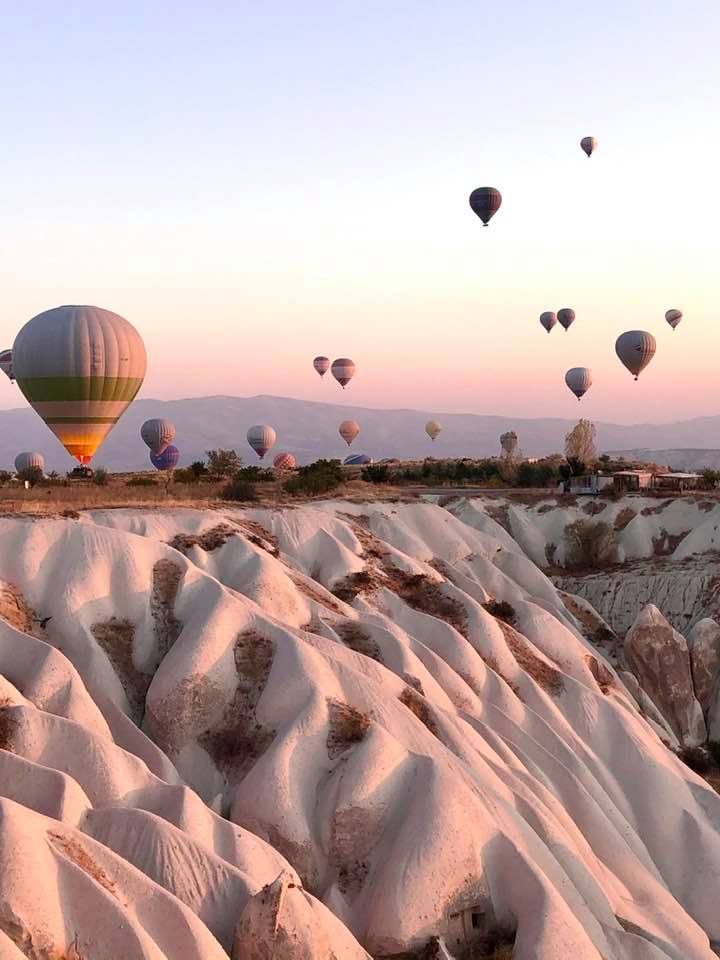 As well as the usual recommendations for loose cotton clothing and layering, you will need sunglasses, suncream and a sun hat. However, do make sure to pack a good pair of trainers or hiking shoes. When exploring the cave dwellings, old churches, underground cities and fairy chimneys, there are often many steps to climb and the footing can often be slippery or gravelly – so good footwear is essential.

For More Ideas On Things To Do in Cappadocia

For more ideas on things to do in Cappadocia, including Hot Air Ballooning, please take a look at our article here.

Photos by Christina and Alara Yegen

Alara is a graduate of Koc University in Turkey and holds a Master’s degree in Culinary Arts from the Business and Hotel Management School in Luzern. Having worked in the 3 Michelin star restaurant, Baumaniére, she is now working as a Gastronomy Executive in Turkey Tourism and working in the prestigious Le Cordon Bleu School Istanbul. She hopes to open her own bakery in Istanbul.

Three Swiss Lakes Which are Stunning in Autumn!

Glacier 3000 – A Skiing Paradise For All The Family

A Trip to The Beautiful Town of Annecy in France

Three Swiss Lakes Which are Stunning in Autumn!

How to Get The Best Shots With a Mobile Phone