Visit Lenzburg Castle – One of the oldest Castles in Switzerland

Visit Lenzburg Castle – One of the oldest Castles in Switzerland 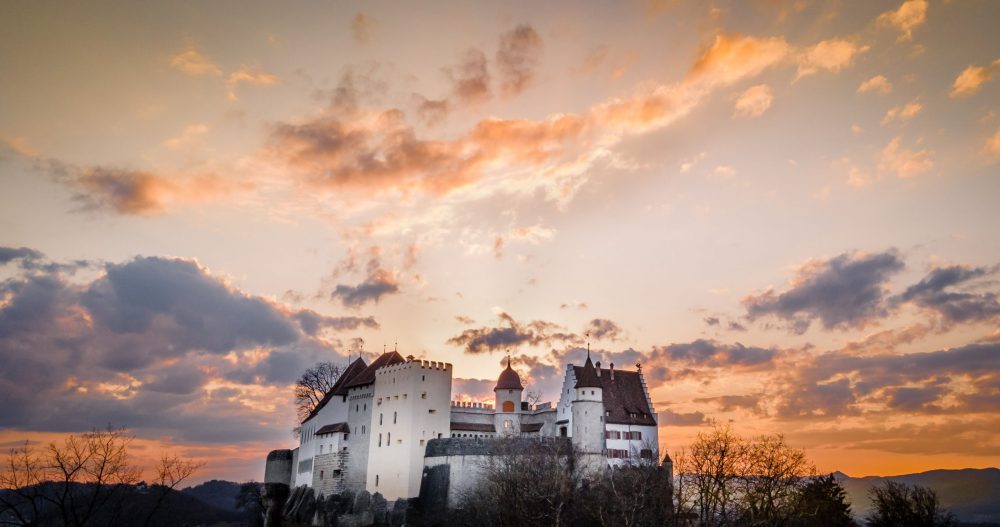 Lenzburg Castle is easily accessible by both train and car from Zurich and takes under an hour to get there either way. It is one of Switzerland’s oldest castles and a quite magnificent and very imposing building. Over the years it has had a very chequered history and was originally built as a refuge fort in the Early Middle Ages. Lenzburg Castle is first mentioned in connection with Ulrich II, Count of Lenzburg, in a document dated 1077.

Lenzburg Castle Is Perfect For a Family Visit

The castle has an amazing history and is the perfect place to explore as a family with its original drawbridge leading to a courtyard. There is a museum to explore, an exhibition about knights and nobility, a dragon research station, a children’s museum and a history studio. They event have a Castle Fox Trail which is a treasure hunt within the castle grounds. You can also enjoy the gardens where there is a café. In normal times, the castle organises a number of events every year and hopefully once the Covid situation is under control, they will return.

The History Of Lenzburg Castle

In 1173, the castle passed to the Holy Roman Emperor Frederick I, Barbarossa, and then to the Counts of Kyburg.  In 1340, the Habsburgs built the Knight’s Hall and Lenzburg Castle became the seat of the Habsburg administration. From the 15th to the 18th Century it came under Bernese rule and in 1803, Lenzburg Castle was taken over by the recently formed Canton of Aargau.

From 1823 till 1860 it served as a school for boys and in 1860 the Castle was sold to the Pestalozzi-Scotchburn family. In 1872  Friedrich Willhelm Wedekind, a doctor and father of two famous artists, Frank Wedekind, a writer, and Erika Wedekind, an opera singer purchased it. Next it was sold to the American Augustus Edward Jessup in 1893. He lived in the castle with his wife, who was related to the English royal family.

After that, in 1911, James W. Ellsworth, an American industrialist acquired the Castle and passed it on to his son, Lincoln Ellsworth, a polar explorer, in 1925. 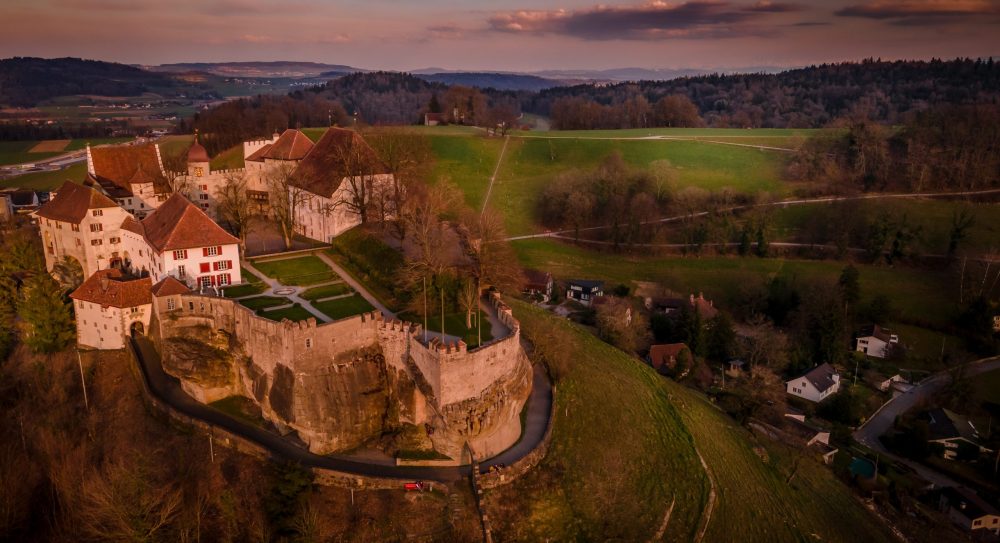 In 1956, the City of Lenzburg and Canton of Aargau acquired the Castle and opened it to the public along with its grounds, including the Knight’s Hall, courtyard and garden. Today you can experience history first hand by visiting the castle and one of the best ways is to go on one of the tours they run. 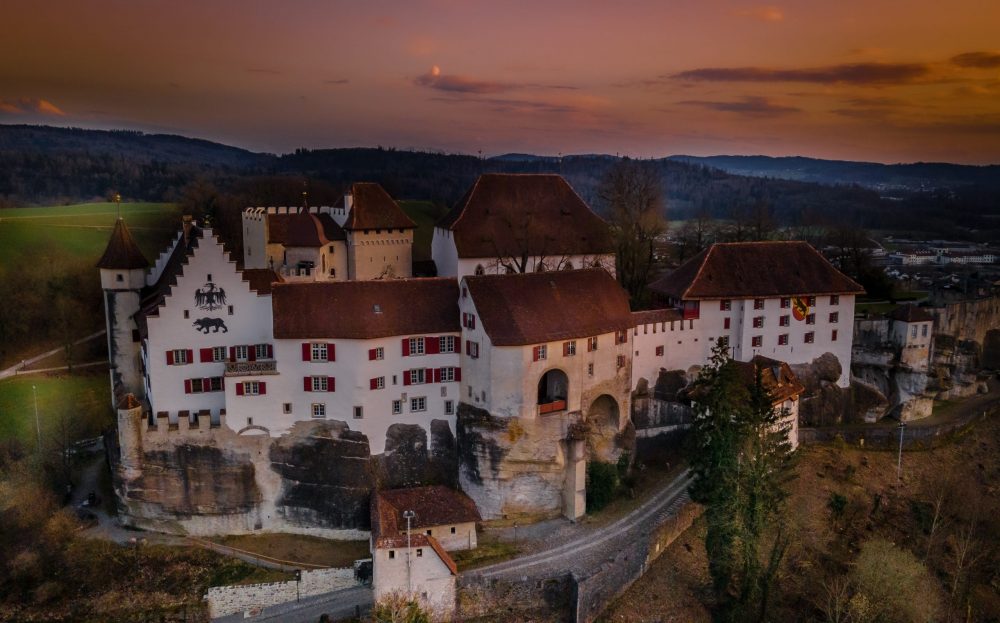 Photographer Sebastian Andrei captured these beautiful shots of Lenzburg Castle as the sun was going down one Spring evening. 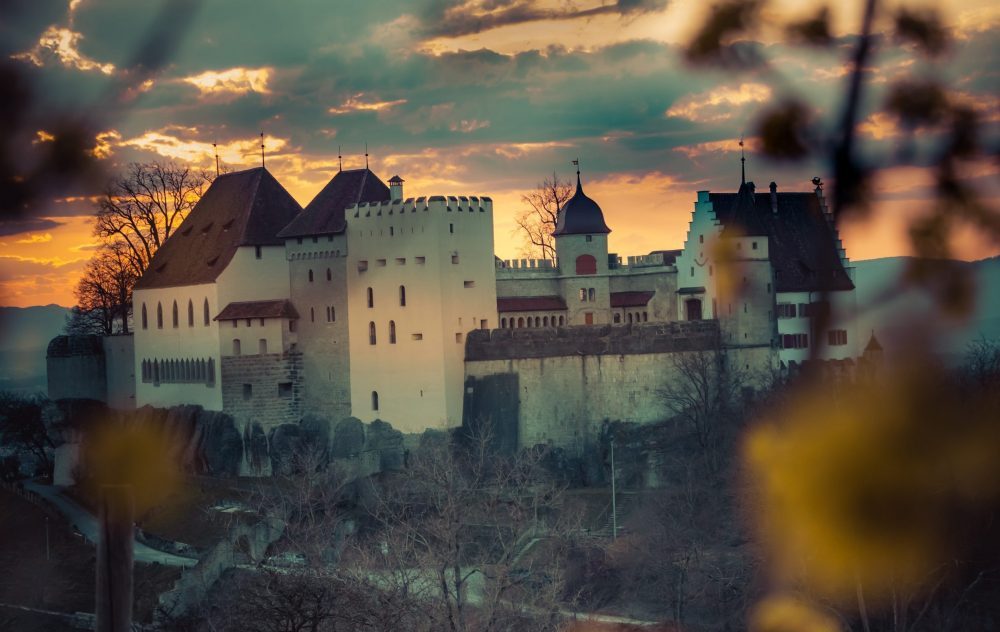 The photos present the fortifications from various angles, showing the expanse and structure of this very imposing Swiss Castle. 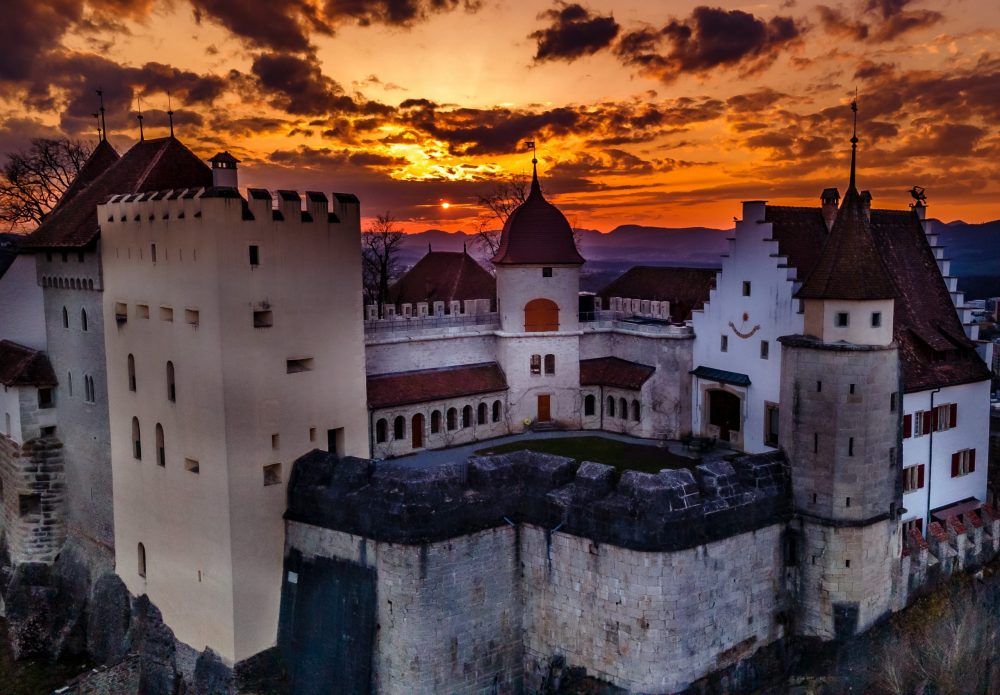 If you would like to visit the castle, please see the information below regarding opening times and location details.

All photos by Photographer Sebastian Andrei.

Tel: +41 62 888 48 80
Open: 10am – 5pm
From: 1st April to 31st October 2021
Days: Tuesday to Sunday
Monday closed
Open on public holidays. Except the second Friday in July
Admission: Castle & Museum CHF 14, Castle only CHF 5
Yuou can also purchase a 3 Castles Pass which allows you to visit the castles of Lenzburg, Hallwyl and Waldegg for CHF 34 and is valid for one year.  All prices subject to change.

A Winter Postcard From Beautiful Lugano

A Winter Postcard From Locarno in Switzerland

The Fork in The Water in Vevey

Sky High Views at Glacier 3,000 on the Peak Walk by Tissot